National identities at the 2018 World Cup in Russia

During the FIFA's 2018 World Cup held in Russia, expressions of national identitity and the concomitant stereotypes were omnipresent. Not only because the participating teams represent nation-states, but also because the cultural specificity of each nation is emphasized by organisations, corporations and fans. The idea that each nation is somehow unique is noticeable not only in the distinctive aesthetic features but also in the belief that each nation possesses its own character. Often, this national character is a tool to interpret a team's game on the pitch. One example (of many) concerns a comment by the Danish former  player Kenneth Pérez when he was asked which team disappointed him the most: "Denmark. I do not refer to the fact we lost in the second round, but to the manner in which we played. They were not playing at all-in accordance with the Danish DNA. It was so steady, it looked more like Norway." After winning the semis against England, the Croatian coach also explained the team's performance by invoking a more general and 'deeper' passionate national character: "our team was losing three times and had to come back. We are that kind of people, proud and of strong character. This is fantastic for Croatian football and country, […] we do not have a stadium, these are our circumstances, but we do have passion and quality players." How the given team plays is explained by how the nation is.

[To read the extended essay version, click on this link: http://imagologica.eu/CMS/upload/WorldCup2018.pdf ]

Let’s celebrate the national past, that’s what it’s there for

A commemorative event on 26 July 2018 marks the fact that it it then exactly 437 years ago that the Estates General of the United Provinces foreswore the Spanish King Philip II as their lawful sovereign. The act of 1581 was indeed a great moment in the history of democracy and the run-up to the idea of popular sovereignty. The commemoration frames it, however, as a national-identitarian event. "The Netherlands commemorates the signing of the document", as the press header has it, and the day is insistently called "Independence Day" - under the emotive header "Is The Netherlands ready for its own Independence Day?", suggesting this could be an annual feast day. One historian places the initiative in the context of similar recent celebrations of Dutch national symbols. While the instigator admits that the initiative could be assocated with nationalism (and the tone of the newspaper coverage is a good illustration of that drift) he thinks its emphasis on an innate right to freedom would appeal to all ethnic communities in the country. In other words, it is an expression of “good” civic nationalism rather than “bad” ethnic nationalism – as if you can have one without the other.

Hidden persuaders on a milk carton

As spotted in a supermarket last week. How do you make people buy your brand of milk? 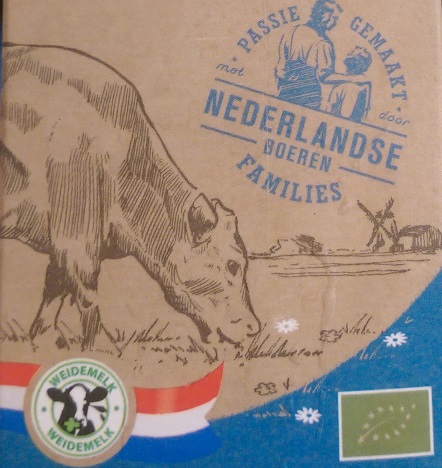 Images of wholesome agriculture (cow, pasture), but also a lot of nationality: an iconic windmill (not really there for dairy purposes...), a Dutch red-white-and-blue flag, and a stamp stating in huge letters that this milk was made with passion by DUTCH farming families (note the added feel-good invocation of Family Values).

Roel Reiné is a filmmaker with a penchant for heroic-historical action movies with heavy overlays of special effects. His popular action movie Michiel de Ruyter (2015; distributed internationally under the English title Admiral) already contained a remarkably anachronistic, flag-waving speech extolling the character and greatness of the Dutch nation (online here). In interviews, Roelé testifies to his appreciation of patriotic flag-saluting ceremonial in the USA. He would like to see a similar ethos in his native Netherlands, and is candid about this as the motivation for the bombastic flag-waving in Michiel de Ruyter.

Roelé, again teamed up with producer Klaas de Jong, has now turned his attention to an earlier hero: The Frisian King Redbad (†719), known for his resistance against Christianization and Frankish hegemony. Advance notices (the film is due out this month) indicate that this is, again, an unabashedly nationalistic production and that its script (again by Alex van Galen) involves a similar mixture of anachronistic distortions of historical fact and manipulative xenophobic ethnotyping.
[....]